I am looking forward to watching TV later tonight. A co-worker of mine and her husband are competing on this season of The Biggest Loser. They’ve made it all the way to the finale (we hope anyway–cliff hanger!) and, collectively, have lost almost 200 pounds so far. I have not only enjoyed watching Jacky and her husband find health and wellness through tireless hard work, but I have also been moved by the fact that they left their children behind to embark on this mission. They knew the long term benefits far outweighed the few months of separation. They can now live healthier, happier, more active lives, and their kids will do the same.

I’ve watched each episode via DVR with my two sons the morning after it airs. I’ll nurse Kellen and get cozy on the couch besides Paxton and we will cheer for the contestants during the challenges and talk about their struggles. Pax will often ask me why I’m crying, too, as the emotion of the show hits me. He doesn’t get it, though, nor should he at only 3 years old.

Kayden is in kindergarten full-day and missed my maternity leave Tuesday mornings catching up on the show. On President’s Day, weirdly enough, she asked about it. “Is your friend still on TV?”, she questioned. “Yes,” I said. “Want to see?” So I put on the previous week’s episode: makeover week. I’d watched already and wanted to take advantage of the boys’ overlapping nap, so I started doing laundry and prepping dinner. Before long, I heard sniffles coming from the family room. There was Kayden, sitting tall against a fluffy sunshine-colored pillow, staring at the screen with tears streaming down her face. When I asked if she was OK, she simply told me to go so she could watch alone. My presence was definitely embarrassing her. I stood for a moment, caught in a conundrum, or a momundrum, as I call it: the motherly dilemma we face that seems to only be between equally bad options. Do I stay and talk her through her emotions? No. She’ll get angry. Do I turn off the TV so she isn’t so impacted? No. Life is full of emotions, but does she really need these emotions right now? Do I leave the room, as she requested, and let her fend for herself emotionally? And that’s what I did, option 3.  I knew she would talk to me about this when she was ready.

I headed up stairs with a basket of laundry and as I overturned it on my bed and began to fold, I, too, began to cry. I also began to pray. I began to thank God for Kayden, something I don’t do enough. She is free spirited, mature yet still a kindergartner, strong willed, emotional. I often allow those traits and the chaos of my day to color our interactions. Just get dressed, Kayden. We’ll have time for that later. Yes, you must eat at least five bites for dinner to even count as dinner. Come on, girlfriend. We don’t have time to play school. We have to go to real school.

But Kayden is exceptional. I must remind myself that. She, at 5 years old, gets things. She watched the makeover episode of The Biggest Loser and cried because families were being reunited, because lives were being changed. She’s exceptional because as we sat to eat breakfast on Christmas morning, she asked to offer a new prayer for Daddy’s grandmom Pat–who passed away over the summer–to enjoy her first Christmas in heaven. She is exceptional because when she learned one polar bear at the Philadelphia Zoo passed away, she wailed for a half hour, asking why the other polar bear had to be alone or why so many kids won’t get a chance to see her now.  And then she remembered GiGi Poppop in heaven may see the polar bear and she perked back up.

When Kayden asks a question, especially one that leads to a momundrum, I often take the approach less desirable: I tell her the truth. Last year, Kayden asked me how babies come out. “I know God puts them in all the mommies,” she stated to my joyous surprise, “but how do they come out?” Well, I told her. I told her about the different types of births and gave examples of women in our lives who had delivered each way. I told her how she and Pax were born and that I hoped to do the same with this baby. When Kellen was born, Kayden asked me two questions immediately upon visiting us at the hospital: 1. Did he come out of your belly or like you wanted him to? 2. Did the doctors fix his lung yet? We never hid any of our Kellen worries from her; she would have intuited them if we had.  She may become emotional watching The Biggest Loser, and when a polar bear passes, but when she deals with death or hardships or health issues within our true family, issues she can see and touch in real life, she just handles them.

Kayden is exceptional, but she is also 5. She still throws tantrums, but I am really starting to understand from where they brew. She truly thinks and feels like an adult, but she doesn’t always have the words to express that or the authority to deal

with what that means on her own. This plagues her. She spends every waking minute pretending to be an adult: being a teacher or being a mom. These are the moments when she is most exceptional. When she has to be a kid, though, when she has to rely on others or take direction, her mind can’t wrap itself around that.

That’s why I also prayed to be patient with her, to better understand how simultaneously easy and complex the world is for her. She is her own toughest antagonist. She is her own conflict. Kayden is exceptionally tough and intuitive and spiritual and smarter than me.  And I must thank God she is mine. 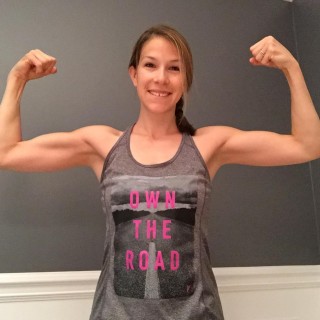 I am a mom of three, teacher, and new-found clean eating obsessive who enjoys fitness, reading, and fun with my family. I hope "to fill my motherhood" with health and smiles.